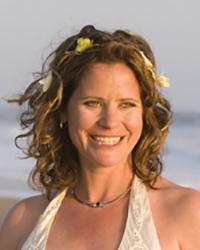 Aleya Dao is an author, sound healer, energetic practitioner, Doctor of Oriental Medicine in New Mexico, and a Licensed Acupuncturist in Colorado. She has been an alternative healer for 25 years. Aleya graduated from Lewis and Clark University in Portland, Oregon and earned her Master's Degree in Oriental Medicine from The Southwest Acupuncture School in Santa Fe, New Mexico. She practiced in Telluride, Colorado for seven years before moving to Santa Barbara, California where she serves an international clientele as a spiritual guide and sound healer.

In 2001 Aleya had an enlightenment experience, which enabled her to perceive other realms, hear the angelic beings, and increased her empathic and clairvoyant abilities.

Sounds True released her Light Body Sound Healing album in August of 2014. Aleya now has seven albums available via her online store, Amazon, and itunes. Her debut Book, Seven Cups of Consciousness: Change Your Life by Connecting to the Higher Realms with New World Library was released September of 2015. Her book is about seven concepts that empower and assist individuals in creating the life they desire using the higher realms.