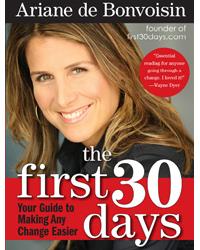 Ariane de Bonvoisin is the CEO and founder of first30days.com, an organization developed to help people transition through any change, whether its career, health, lifestyle, relocation, or personal relationship changes. MSN has named Ariane their Life Change Expert and her advice is sought by thousands around the country. The First 30 Days: Your Guide to Any Change HarperCollins, 2008 will be released in paperback in May of 2009. The book provides a wide range of advice aimed at guiding readers through the principles of change.
The First 30 Days reveals how the beginning of any change is a pivotal time that can either leave us stressed and stuck or lead us forward in our lives with clarity and hope. Change coach Ariane de Bonvoisin provides the tools to make each change a new beginning, whether it is a change you want to make or one brought on by a situation out of your control. Ariane introduces nine principles that will help you develop an optimistic mind-set toward change, an attitude that encourages you to see that life is on your side and that good can come from even the most difficult circumstance. With real-life stories, practical exercises, and inspiring action points, The First 30 Days teaches the skills you need to face any change -- skills that will help you today and for the rest of your life.

No stranger to change herself, Ariane, born in New York City to French-Belgian parents, grew up in Hong Kong, Paris, and London, was exposed to different languages, cultures, schools, and ways of living. She spent nearly a decade working for major corporationsBCG, Bertelsmann, Sony, and lastly as Managing Director of Time Warners Digital Media Venture Fund. Included in her journey was extensive world travel, from heading a nonprofit in Africa to taking students to Antarctica, to scaling Mount Kilimanjaro. In order to provide material for The First 30 Days Ariane traveled the world to interview people on the subject of change.

With a degree in economics and international relations from the London School of Economics, Ariane worked in over a dozen countries in a few years. After an MBA at Stanford, she worked with media giants BMG and Sony Music. In 2000, Ariane was tapped by Time Warner to become the Managing Director of a new digital media venture fund. First30days.com became her lifes work in 2004. Ariane is based in New York City where the company is also headquartered.