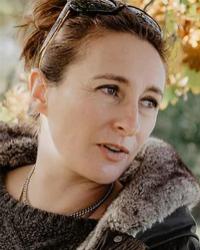 Based in the UK, Hannah Velten is a grief healer, writer, and speaker on a mission to heal and transform grief in the world. She works alongside her brother-in-Spirit, Christian, who went missing in Mali, Africa in 2003 while on a solo expedition to follow in the footsteps of the Scottish explorer Mungo Park.

For the next 12 years, with no news of Christian's whereabouts, Hannah suffered from ambiguous loss and complicated grief disorder as she tried to balance married/family life with her career as a non-fiction author. But in 2015, she was forced to face Christian's absence - she needed to find closure for herself, her young family, and her parents. Her intuition told her she would find her only sibling, but she had no idea how after failing to find him via social media.

Following a 'dark night of the soul', she experienced a spiritual awakening in which she was guided to heal and transform herself - become whole. It was in May 2018, finally, that the truth of Christian's death, and Earth-Bound status, was revealed and Hannah was finally able to retrieve Christian's 'missing pieces' from Africa and allow him to ascend whole. In the glare of social media, Hannah and Christian then worked through their grief, culminating in Hannah retracing Christian's final few weeks in Africa via trance mediumship and having his whole story, and death by forced drowning, revealed. Closure was possible, despite never finding Christian's body.

Now, working with Christian and her spirit guides, Hannah helps others to find wholeness and peace after loss. Most of her 1-2-1 healing involves 'difficult' deaths (unresolved, mysterious, sudden, troubled spirits), but she is being guided to share her sibling healing journey in these times of Covid-19 and global disruption. Hannah also channels workshops and courses through their online 'RAISE' grief healing community.