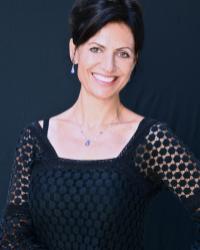 French and Finnish born, Michelle became aware of her psychic medium gift as a child and after devouring Linda Goodman's Sun Signs at 14, decided to become a professional astrologer.

At first self-taught, at the age of 17, she enrolled at the Faculty of Astrological Studies in London to earn her Diploma a few years later, further complemented by graduate studies in Medieval Horary Astrology with Olivia Barclay.  Among other prestigious teachers, she studied with Liz Greene, Howard Sasportas, Charles and Suzy Harvey, John Addey and Cordelia Mansall. She was 21 when she obtained her Master's Degree in philosophy with honors, at the University of Geneva, Switzerland, on the Role of Archetypes in the Meaning of Human Existence in the Works of Carl Gustav Jung. In 2006, she was selected to be the exclusive Astrologer at the 78th Academy Awards where she did readings for several prestigious nominees.

She is also a trained actress and model, at the Beverly Hills Playhouse in Los Angeles (taught by actors Jeffrey Tambour, Jocelyn Jones and Allan Williams), the Phoenix Film Institute and the Gene Bua Acting for Life studio in Burbank, CA. She was cast in several Hollywood movies and music videos ("the woman in red from the past" in The Backstreet Boys' Show Me the Meaning of Being Lonely) and is the  french voice of the navigation system in Hondas in Canada (Alpine).

She also has a professional degree in Hatha Yoga from the Ecole Française de Yoga du Sud-Est Méditerranée, has studied classical piano (Conservatories of Paris, Geneva, the American University in Washington D.C.), is a red belt in Tae Kwon Do (member of the National Black Belt Club),  volunteers with FreeArts for abused children and in her free time, paints.

Prior to writing in 2008 the revolutionary Astrology for Enlightenment (Atria Books, Simon & Schuster, NY), she authored 6 books in French, Finnish, and English on Astrology, Living Food Nutrition, Yoga, and Spiritual Novels, one of which, L'Amour Miroir (a series of 3 short stories) won a literary prize in France, and another (both in French and English) Aruna, An Initiation Tale based on a vision she had when she was 20 years old.

A regular newspaper and magazine contributor, Michelle Karen writes a monthly astrological column in the Sedona Journal. Her expertise is also called upon globally by many high profile radio and television shows.

Michelle enjoys a varied clientele in over 57 countries on 5 continents. Her readings are in-depth, unique and precise. Michelle uses astrology, tarot cards, numerology, along side her profound psychic abilities. She is reputed to "read" people whom no one else can read. Not only does Michelle analyze the charts; she heals planetary alignments and personal energies, enabling significant life-shifts to occur. In a public conference, in December 2009 in Laguna Hills, CA, Kryon, channelled by Lee Carroll said of her that "She is a Master Astrologer, who reads the akashic records directly. She is the first one to bring quantum astrology to this planet".

Her Finnish roots and love of nature led her year after year to Peru where she was initiated by Don Alejandro, Don Pasqual  and the Alta Mesayok Doña Maria to the ancient ways of the Q'ero Master Shamans. She further graduated from the Four Winds Society under the tutoring of Linda Finch and Alberto Villoldo. Since 2009, she has been leading groups to Peru and Bolivia on mystical, transformative journeys. She has also spent time in Colombia with the Arhuaco Mamos in the sacred mountains of the Sierra Nevada of Santa Marta where she had the privileged to further explore the indigenous wisdom of South America. She works as a shaman, performing ancient ceremonies all over the world.

A global citizen, Michelle has lived in France, Switzerland, Finland, England, Canada, Colombia, Peru and the United States. When she's not traveling the world, she spends her time between Los Angeles, CA and Helsinki, Finland with her Master Cat Rafayel. She is multi-lingual, fluently speaking French and English, as well as some Finnish, German and Spanish