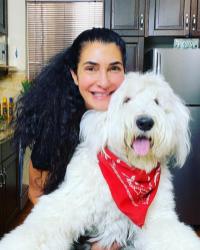 Roanna Sabeh-Azar was born in Toronto, Canada. Since an early age she was placed in a French school and French became her second language.  At the age of 16, Spanish became a great interest to her and hence, it was learned; followed by Italian and now she is studying Portuguese.

Roanna’s creative spirit was always powerful even as a child.  Her energy was always vibrant and strong.  She believes that energy should be harnessed and a person should evolve as a spiritual human being.  Her countless hours aiding charities and similar organizations remind her everyday how very lucky she is.

After graduating high school with honours, she studied Psychology for one year at Western University.  Studies of human behaviour and philosophy are a passion of hers, but of course so were many other things in Life.  She went on to graduating with a degree in Hotel & Food and Beverage Management.

Her first business was an import/export company featuring house wares from Mexico selling to the trade and through her own retail store and restaurant.  While still running Barroco, she began Neo-Paws™ International, a company dedicated to Safety apparel for dogs.

For the past 15 years, she has diligently worked to make Neo-Paws International, the number one apparel company world-wide.  She is dedicated to helping pets and their owners live healthier and happier lives.  This business is her passion because it meets all of her demands and allows her to play every day.

Somehow however, life presented a twist and Roanna’s energies were put to use in a different way.  Finally her life long desire took shape.  She was called and offered a chance at hosting her very own television show called ‘Entrada’, Journies through Latin Americain Cuisine & Culture that now airs on many different channels worldwide.

Neo-PawsTM however demanded her full attention but her desire to continue landing new roles in different television shows or producing her own was always prominent and hence Doggie Style TVTM was born.

There is so much available for dogs and their owners these days and this show highlights the best of the best, industry leaders, great places to go, doggie fitness, health & nutrition, sports, products, trade shows, events and

Her desire is to continue landing new roles in different television shows, produce her own and one day owning her very own hotels which the dream has already started becoming a reality!

Stay tuned for more to come!